The United States Department of Housing and Urban Development (“HUD”), Office of General Counsel recently released new guidelines regarding the use of criminal records for background checks in the housing market. The HUD’s statement can be found at https://portal.hud.gov/hudportal/documents/hud doc?id=HUD_OGCGuidAppFHAStandCR.pdf and was posted April 6, 2016. The purpose of this article is to inform you all of this recent HUD posting and some best practices in the housing market.

To sum up the new HUD guidelines, barring people from housing based just on arrest records is no good, because arrests alone aren’t proof of guilt.

Across the United States, African Americans and Hispanics are arrested, convicted and incarcerated at rates disproportionate to their share of the general population.

Consequently, criminal records-based barriers to housing are likely to have a disproportionate impact on minority home seekers and cause an unintended discriminatory effect.

And even if you only consider convictions, refusing to rent to all ex-cons, also isn’t defensible, since not all ex-cons will pose a risk to safety or property. Instead, the HUD has said that landlords, community association boards, and property managers should have a policy that takes into consideration what the crime was, when it happened, and what the end result was (rehabilitation) as well as other factors, to reduce the discriminatory impact, e.g., petty drug offenses should be irrelevant to screening process.

Some practical exceptions where it would likely not be discriminatory to deny a person would be if a conviction was for manufacturing or distributing drugs (public safety concerns), violent crime (i.e., armed home invasion—again, public safety concerns), crimes involving dishonesty or financial crimes (relates to an occupant’s ability to pay), recent prior evictions or bankruptcies (on the civil end of a background check), but the amount of time that has passed since the offense and the overall outcome is equally as important. 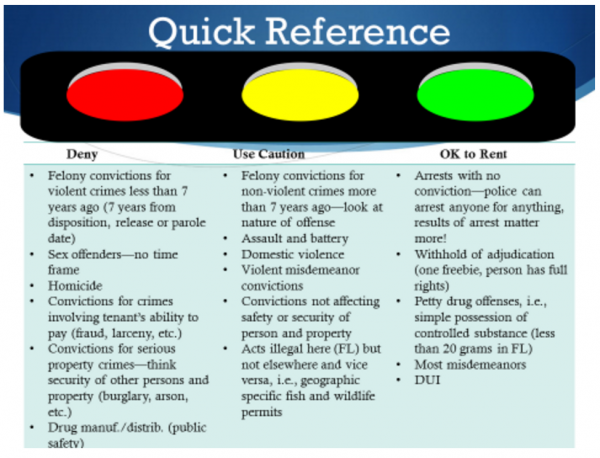 Additionally, the HUD also warns landlords that if they do intend to discriminate, and use criminal records as a cover for their actions, they can be found in violation. For instance, landlords who reject black or Hispanic applicants ostensibly because of criminal records — but accept a white tenant with a similar criminal record — could be found guilty of violating the Fair Housing Act.

That discrimination could happen even before a candidate applies, HUD writes:

“Intentional discrimination may be proven based on evidence that, when responding to inquiries from prospective applicants, a property manager told an African-American individual that her criminal record would disqualify her from renting an apartment, but did not similarly discourage a White individual with a comparable criminal record from applying.”

In all cases — whether the discrimination is accidental or intentional — each instance would have to be considered on a case-by-case basis. “Arbitrary and overbroad” policies, as well as any that are mere pretexts to conceal discrimination, aren’t protected.

So, what should you do? Our recommended best practice before you rent is to be consistent and use the same process when accepting applications, conducting background checks, or executing leases, be reflective and think about the rationale behind your policies and procedures (they should reflect sound business reason and nothing personal). When advertising a unit for occupancy, keep to just describing the property, not the type of person you want to live there. Another option is to consider using a third party background check company with an approved list of general criteria for issuance of either a ‘green’ or ‘red light’ regarding the proposed occupant, to remove some onus away from the property manager, board, landlord, etc.

HUD officials recently asked the prophetic question to all landlords when considering their applicant screening goals: Is their policy toward criminal records about keeping a community safe? Or is it about keeping somebody out of a home?

If you’re experiencing concerns in this area and need help sorting out a particular scenario, please give us a call. You don’t have to go it alone.

About the author: Kara C. Tanis, Esq. is an associate attorney with Kelley & Grant, P.A. She enjoys association law as her majority focus, and has several years of insurance litigation as well as landlord-tenant law experience. Ms. Tanis earned her Bachelor of Arts degree from Florida Atlantic University and her law degree from Nova Southeastern University. She is a member of the Florida Bar and the United States District Court, Southern District of Florida Bar.

Fill out the form below and we will be in touch with you as soon as possible.